A little while ago, on January 24 through 27, I (and my fellow YAGM cohort members plus three other international volunteers) attended a seminar in Budapest, hosted by Phiren Amenca. If you’re unsure what that is, check out this other blog I did or take a look at their website (it’s in English). They also have a Facebook page!

During our seminar, we discussed our experience with racism against our fellow Roma community members, learned more history about Roma and Budapest, and defined Antigypsyism. There was a lot packed into, what was essentially, two days.

(Wondering why I’m saying Roma and not g*psy? Here’s why. Nonetheless, it’s important to note that if a Roma individual refers to themselves as a g*psy, that is their prerogative, their choice. As a non-Roma, if you’re going to talk about the Roma community or an individual person, refer to them as Roma/Romani, not as g*psy.)

On Friday, we started out our seminar with a timeline, marking down events in history that we found to have significance or importance to our lives. My events were: America’s independence, the Woman’s Suffrage movement, 9/11, when Obama was elected president, and when Trump was elected .

What events would you have chosen? Why did you choose them?

Unfortunately for Roma, much of their history is unknown to them. The history that is known, is not widespread. Once example of this is the Holocaust. Nazis did not merely capture and kill Jews, gay men, and disabled individuals. There was an attempted genocide on the Roma community too. However, during the Nuremberg Trials, there was not a single Roma witness. Most Roma to have been freed from the concentration camps stayed there because they had nowhere else to go, no one to fight for them to regain what was lost. It wasn’t until 1982 when the crimes against Roma during WWII were recognized in Germany. 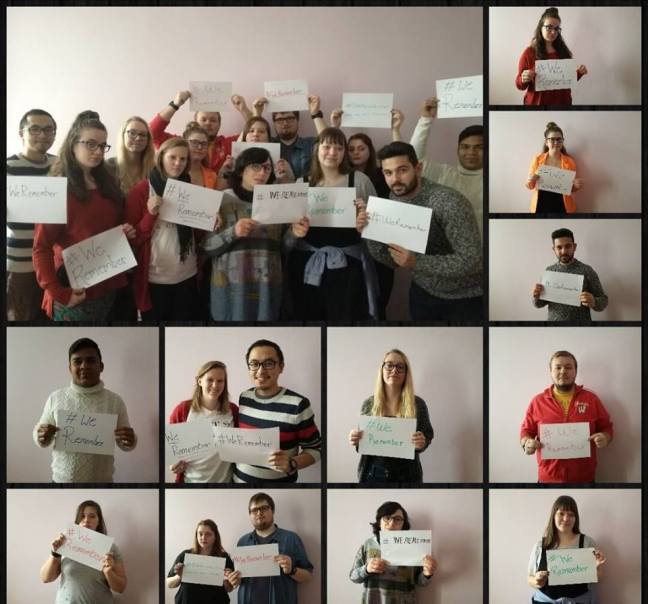 Here is myself and the entire seminar group, holding up the signs with #WeRemember for International Holocaust Day, which is on January 27.
Photo from Phiren Amenca’s FB page.
Individual photos, starting from top, going left to right: Sydney, Callie, Umut, Vikas, Tabby and Tony, Jessie, John, me, Taylor and Jonathan, Federica, and Tina

We all also took a walking tour on Friday to visit District 8. The “bad” part of Budapest. The part that tourists are told to avoid and be wary of thieves.

The part where many Roma and migrants live.

If you couldn’t tell from my quotation marks, I do not believe that District 8 is any worse than any other part of Budapest. Like any big city, there is crime, there are thieves, and one mustn’t let their guard completely down. But that’s everywhere. The idea that places where large communities of Roma and migrants live are more dangerous than the places where they don’t live is racist and, frankly, dehumanizing.

Personally, I found District 8 to be beautiful. And I really loved our tour guide! 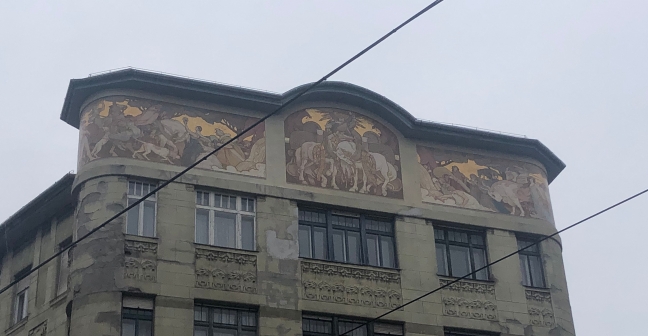 This is one of the buildings from District 8. It is an old beer factory, which you can tell from the mosaic–yes, mosaic. That isn’t paint, but tiny stones put together.

The next day, Saturday, was jam-packed.

First, we played a game, which, big shock coming, had a deeper meaning to it.

Each of us had a piece of tap with a mark stuck on our heads. We had to get into out “groups” without verbally communicating. There were 6 red Xs, 4 red dots (I was part of this group), 2 blue dots, and 1 blue X.

Here were the questions asked of us afterwards: How did it feel to be in your group? How did you feel towards people not in your group? Have you ever consciously felt (or noticed) this [segregation] before?

The next words that were spoken have no left my mind since. I’ve known them to be true before, but after the “game,” it really stuck with me.

Only when a person realizes this situation, this segregation exists can they act to change it in society.

This was how we introduced our next topic: Antigypsyism.

Unfortunately, there is still yet to be one clear and distinct definition for this term, but at the seminar, it was defined for us as:

Attitudes, behaviors, and structures which are anti gypsy (Roma). It also includes any people who are not Roma, but who have been labeled as “gypsy” by the majority culture, and have experienced the racism and prejudice that is accompanied by that term.

We discussed personal examples that we’ve encountered in our communities regarding anti-Roma attitudes, behaviors, and structures, and ways we could stand up to the racism presented to us. Roma inclusion is an illusion until antigypsyism is faced.

YAGM Central Europe missionaries gathered together for the Sending Service and lunch with members of hosting communities from Hungary and Serbia. We are grateful for our partners in ministry who will walk alongside our YAGM this year! In this video is the YAGM Central Europe 2018-2019's adaptation of the song: "Hamba nathi mhkululu wethu (Come, walk with us, the journey is long)" originally written in Zulu and translated to English in 1923 by Gerhard M. Cartford. In the YAGM CE version, they've adapted the original song to inculde Romani, Hungarian, and Serbian. Check out this link to read more about the Sending Service Event. https://www.evangelikus.hu/node/18027?language=huMore pictures can be found in the Hungarian version of this article: https://www.evangelikus.hu/missziora-kikuldve